Back in the (Side) Saddle

Last November, I said goodbye to my partner in sidesaddle shenanigans, Jackson.  He had been in a health decline for a while and the winter would have been very hard on him, but it was still a hard parting. 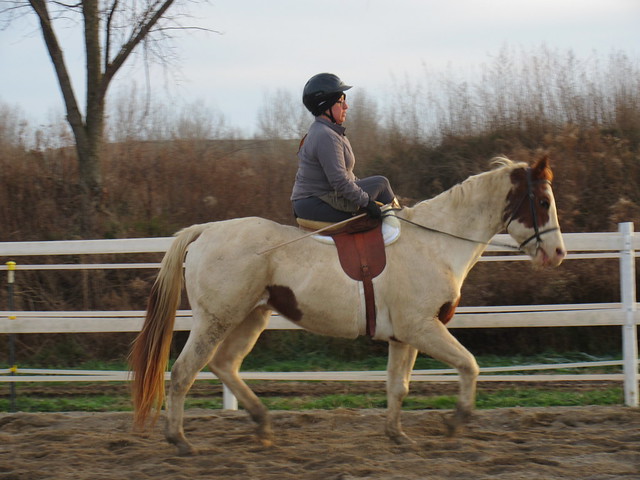 After a year-plus off of riding aside (although not riding in general), I discovered that a different saddle from my collection fits Carter, my current lesson partner, quite well.  He practiced in it twice and then carried me around like a trooper for our barn's Halloween Fun Show! 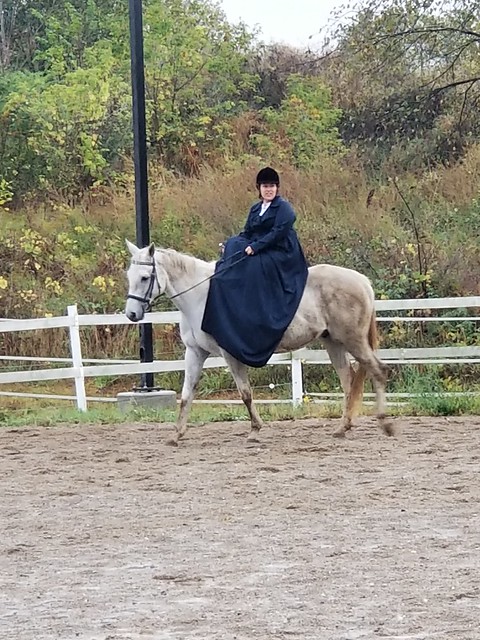 That brief outing really kickstarted my enthusiasm again, and since then I've been thinking a lot about my next riding habit project--a "nankeen" habit for use in hot weather!

There aren't a ton of nankeen habits around, but I've found a couple of surviving ones (mostly for a small/young woman/girl) and they pop up in at least one or two fashion plates I've seen. 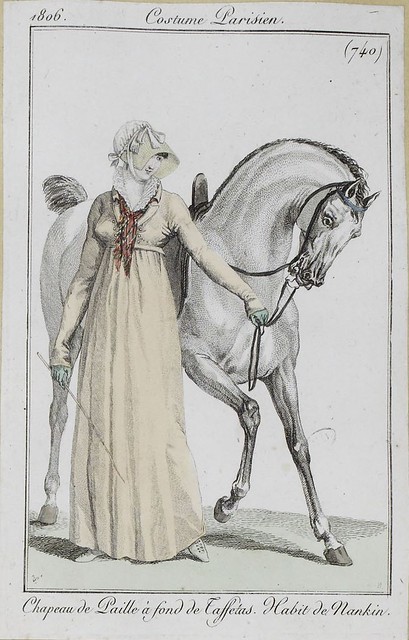 This 1806 plate is actually labeled as being nankeen, and I like how it's styled less formally with the open neck and colored kerchief. 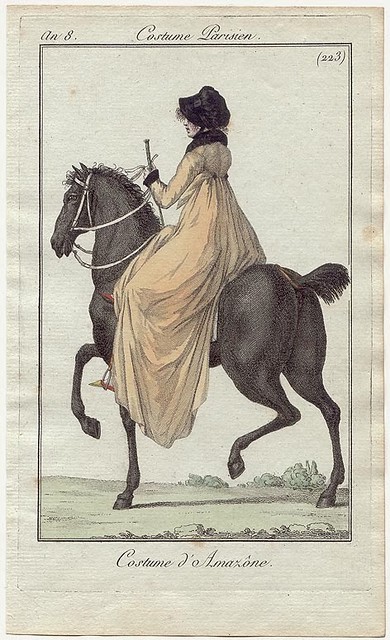 This one you can't see much of but it looks like the front might be hanging open. I love the little bonnet. I can't verify the fabric on this one, it basically just says it's to be worn for riding. It's 1799; I like the idea of doing a late 90s/early 00s style, so I branched out a little in my search to see shapes from a little earlier than my usual years. 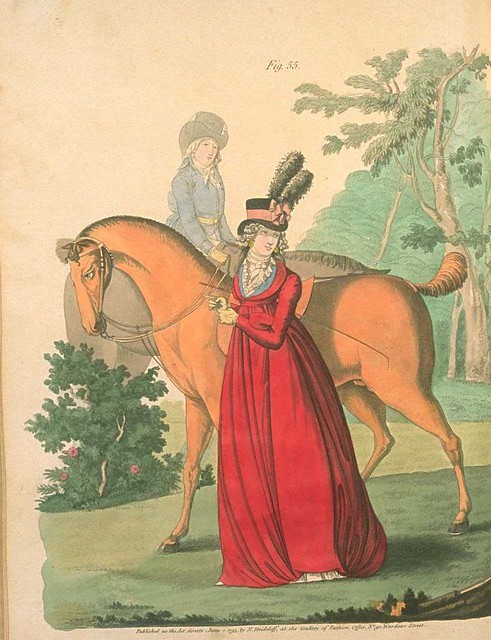 This one I love for a few reasons, number one being that horse's face. "Gettin' real sick of your shit, Mary." HA! I also really like how this seems to be a very iconic 90s shape, to my eye. That extra length and the horse make it definitely a riding dress but the rounded collar is unlike any of the other plates I've looked at. I actually feel like I've seen that neckline in other plates? But I've been staring at these plates all freakin' day and I can't tell if I'm imagining that or not. Anyone? Any ideas if there are similar lines out there somewhere? 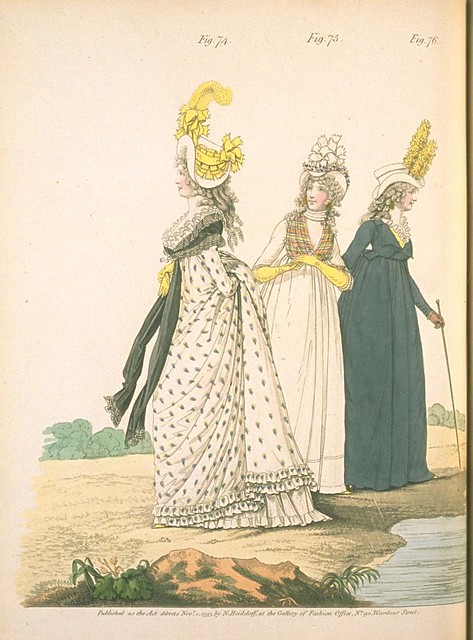 1795 here, and the habit in back is growing on me every time I see this plate. It's got that cool transitional thing going on, with a colored waistcoat underneath and a ruffled chemisette or something instead of a shirt and stock/cravat. 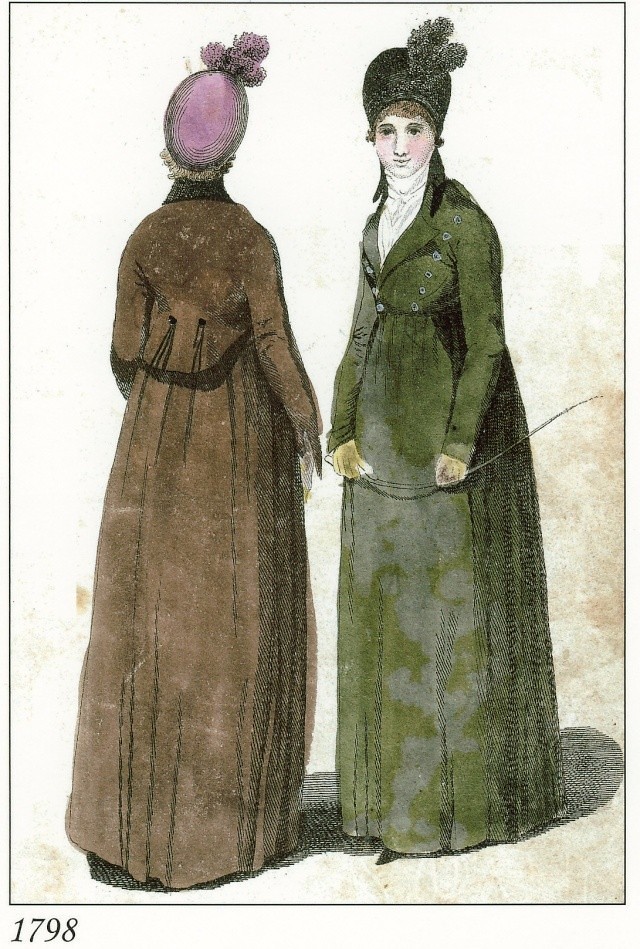 This one does have the high neck and cravat thing going on and the lines look somewhat like the habit I already made, but that lower, rounded bust is really 90s and I like the buttons going up over the shoulders. 1798 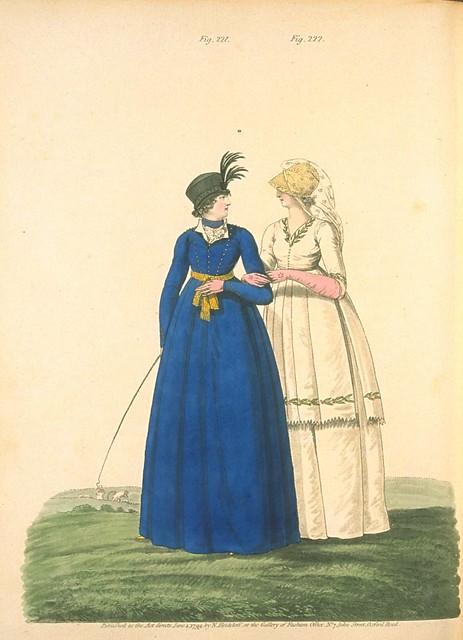 This one has cool buttons too, and what looks like an easy peasy collar. 1797 on this one. The bust and waist being a little lower on this one also differentiates it from later styles.

This silk riding habit for a young girl was donated to the collection in 1964 with a note saying it belonged to the donor's great grandmother. It's dated circa 1790, and the round cut of the belly reflects the fashionable tailored silhouette of that era. The long skirt would have been draped to cover the child's legs as she rode side saddle. Swipe to see more. // #robertandpennyfoxhistoriccostumecollection #ridinghabit #18thcenturyridinghabit #horseriding #equestriangirl #equestrian #equestrianlifestyle #equestrianfashion #equestriansofinstagram #horses #1700s #1700sfashion #1790s #1790sfashion #costumehistory #costumecollection #costumeandtextiles #historyofdress #historyofcostume #equestrianhistory #tailored #childrenswear #childrensfashion
A post shared by Fox Historic Costume (@fox_historic_costume) on Jul 28, 2017 at 7:32am PDT

This one has really neat seam lines although I do NOT love the pleated sleeves.

So, I've got sources coming out my ears...now I just have to decide what direction I want to go!!
Posted by Katie Lovely at 1:33 PM