I've got this really bad habit of not blogging about things as I work on them.  Part of it is laziness (c'mon, you saw that coming), but I think part of it is also not wanting to...disappoint people?  Which is silly, nobody but me is emotionally invested in whether or not I finish projects in a timely fashion, or at all.  Well, except my husband.  He gets invested in projects because some of them are for him!

It just so happens that my current project is indeed for Rich.  I'm working on his 95th Rifles uniform, which needs to be done by October.  I'm still a bit chicken to start working on his tunic (the uniform coat), so I started with trousers. 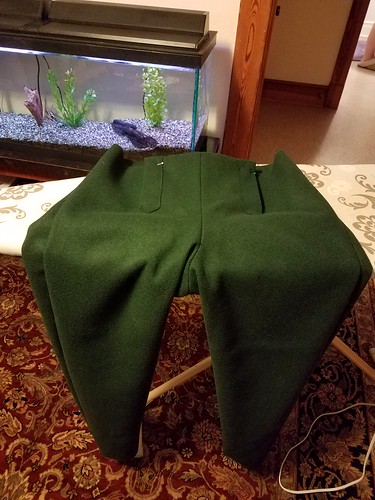 Of course they don't look like much, but that fall-front opening is fiddly work and it's all hand sewn with linen thread that wanted to keep shredding on me, even after applying beeswax.  I do plan on doing a tutorial about how I modified my pattern to match the pair of uniform pants he's been borrowing from the unit for the past year or so, but I haven't actually finished the trousers yet so that's still forthcoming.

The pattern I started with is Laughing Moon #131, and of course the first step was to make a mockup.  I turned my mockup into a real pair of trousers, though, so it was very productive!  Not gonna 'fess up to which trousers are my mockup, though, since they have abominable machine sewing and egregiously on-the-fly fit adjustments hidden in their innards.  You might almost say I made them...by the seat of my pants (womp womp...)

Anyway, this past weekend I went to my friend Julie's house and we had a big sewing day.  I got most of the trouser pieces cut out and assembled, and they are now at the point where I have to have Rich put them on so I can check the fit and take them in where needed.  Then, though, they'll just need whatever alterations I discover, a waistband, and closures!  That doesn't sound like a lot but trousers and breeches have So. Many. Buttonholes.  Then...onto the coat.  Dun dun DUUUUN! 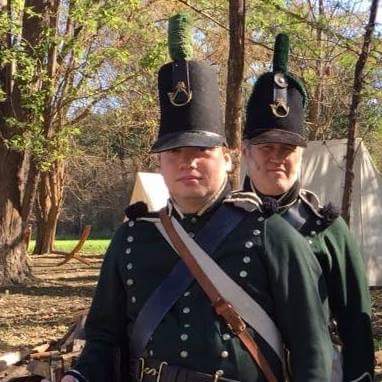 Seriously though.  This guy.  In uniform.  Totally worth it!
Posted by Katie Lovely at 7:30 AM