Goodbye, 2015.  You were a crazy year for sure!  Lots of life changes and water under the bridge.  I shared a little about that in my last post.  Rich and I are still adjusting to life as homeowners; winter has finally arrived in Michigan so he had a chance to bust out his brand new snowblower this past weekend.  We're also chipping away at home improvements, which is fun but time consuming. 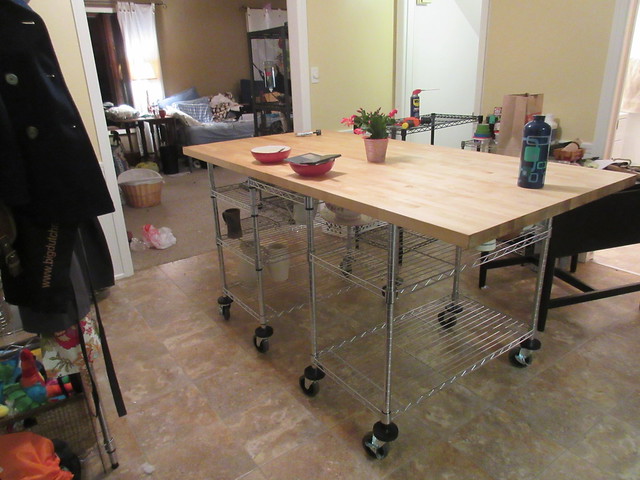 One of our recent projects was "hacking" some Target shelves to build ourselves a movable kitchen island with space for seating.  It was a quick project (done in one afternoon) but not as quick as it could have been if our pipe cutter hadn't given out halfway through.  Fortunately the friendly neighborhood Menards had one in stock!

Some of you might recognize that butcher block top...before we moved, it doubled as my cutting table in our apartment.  In fact, it still is (it currently has a rotary cutter and mat set up on it), and will probably continue to be used when I need a truly large cutting surface in the future (it's 3' by 6', so quite sizable [and heavy!])  My sewing room, which is my current renovation project, will have a smaller version that will fit much better in the 11x12 room. 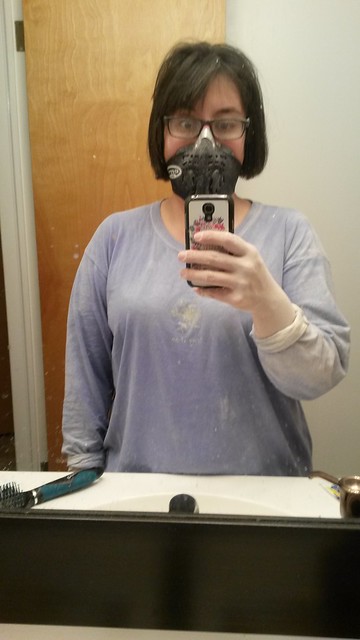 The biggest step in renovating my sewing room was scraping off the popcorn ceiling texture.  As you can see above, it was quite dusty.  That picture is actually pretty tame compared to how things ended up once all was said and done.  It was messy, nasty work but SO worth it!  At this point, the scraping is done and the drywall has been patched; I have to re-don my mask and sand the dickens out of it.  More dust! 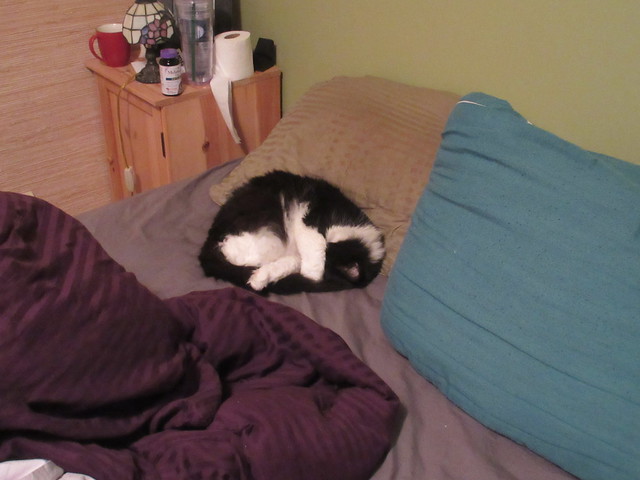 Another project I completed was to pain the master bedroom, but I don't have any photos of the room itself. Instead, have a picture of Lucie hiding from the paparazzi (aka me), with the new green wall color in the background.  The side wall was already papered in grass cloth, so we decided to leave that for the time being.

We also added two new members to the family--a pair of rescue ferrets!  They are...very interesting creatures.  They are a new type of animal for both Rich and me, with different needs, preferences, and habits than any other animal we've ever owned.  In addition, they came from at best a neglectful background, at worst an abusive one.  So, they're settling in slowly and not without some hiccups.  But man, they're awfully cute:


In the midst of all this, I HAVE actually managed to do a little bit of sewing!  My current project is a new pair of 18th century stays, which I blogged about a bit in 2015.  They're wearable, but not quite finished, so I'm working on the binding and lining now.  Well, binding first, then lining will be next and last. 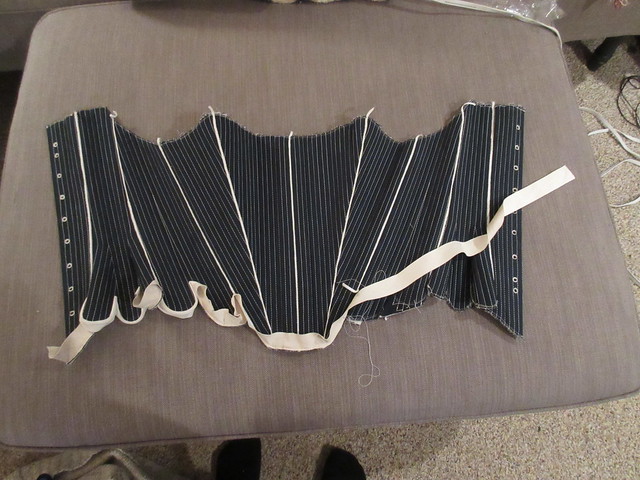 This is my first experience binding stays with leather and while it's not as difficult as I had feared, it's definitely a bit trickier than using fabric!  I think they're coming out quite nicely, though, so hopefully there will be finished pictures to share soon, and then I can start on the really exciting stuff...actual clothes to go over them!
Posted by Katie Lovely at 11:48 AM