I've noticed as I proceed through adulthood that I seem to have a limited amount of creative energy.  Like, when I was in school, I felt like I could do sixty-leven creative things all at once--I used to write stories, draw, sew, blog, journal, doodle in class...all sorts of stuff.  And then the whole full-time job thing happened, and now I'm lucky if I can get in a little bit of sewing after work in between making dinner and doing house projects.

Oh, yeah, and that's a thing.  We bought a house!  We started looking in the spring and this fall, we completed the purchase and moved in, all in one whirlwind weekend. 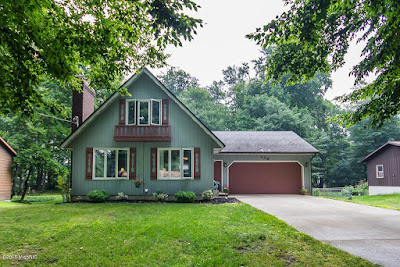 To be honest, it's such a cute little house in such a nice area...SO much more wonderful than anything I ever dreamed we would be able to have.  I'm so grateful!  Rich got a workshop all to himself, and I got space that will become a sewing room.  We also are super happy that it has a fenced back yard...that wasn't on our "must have" list, but our pup Trixie is loving it.  At first she was a good little apartment dog and didn't stray far from our sides when we would take her out, but she has now learned that the yard is her own little kingdom and she surveys it on the regular.  She even has a favorite stick that she leaves outside the door when it's time to come inside.

Anyway, my big projects have been house-related this fall.  I'm about 90% done painting the dining room and kitchen, and have started taping in the master bedroom.  I have crappy pictures of the dining room, but my phone doesn't like taking indoor photos at night, so I'll have to dig out my real camera to get decent pictures.  I'm really happy with how everything is coming out, though, and want to share!

Another project we've taken on this year is growing our pet population.  Back in July, we adopted an 8-year-old kitty named Lucie.  She was an owner surrender at a nearby shelter, and we met her one Saturday while picking up supplies for Trixie at a local shop.  We were already in the process of applying at a different shelter to adopt a cat, but Lucie took one look at my husband and picked him as Her Human.  She flopped right over on her back and offered him her belly, and for him it was love at first sight.  We took her home a few days later.

We also added two ferrets, Bob and Jane, to our family.  They are also rescues, from the West Michigan Ferret Connection.  Dee, the owner, tells us that they were probably neglected and possibly abused, but they've come a long way in terms of trusting people!  We're glad to be able to offer them a quiet, safe home where they can come out of their shells at their own pace.

Lastly, we've once again grown our rat colony.  We now have seven, two girls and five boys.  Three of the boys are babies, brothers from our favorite breeder (which is where we also got the girls.)  Let me tell you, they are adorable!  They're still quite young, so very excitable and energetic, but they're very sweet.  The other two boys we just picked up last weekend.  I received word through an online group that there was a pair of intact males that had been surrendered to a veterinarian in Indiana, due to abuse in the home.  We made arrangements and were able to take them...and we've been very pleasantly surprised.  They must have gotten good socialization at some point because they are very snuggly!  We're very much looking forward to getting to know them better, and so thrilled with how personable they are already.


So, while I haven't been very good about updating, at least I've been keeping busy!  This winter I'm hoping to get my sewing space organized and get going on my big old list of projects.  Til next time!
Posted by Katie Lovely at 10:30 AM No comments: