I'm back from the past!  And I have pictures, as promised.  (Did I promise that?  I think I did!)  I hope you all enjoyed my mini Instagram updates throughout the weekend...I certainly enjoyed sharing snapshots of our experiences with everyone!  I'm still not sure how I feel about ##hashtags## but now at least I can say I gave it a try.

Saturday, we went to Fort Meigs in Perrysburg, Ohio for their 1812 event.  The weather was just about perfect and we had a very relaxed day, sitting in the shade while chatting and stitching. 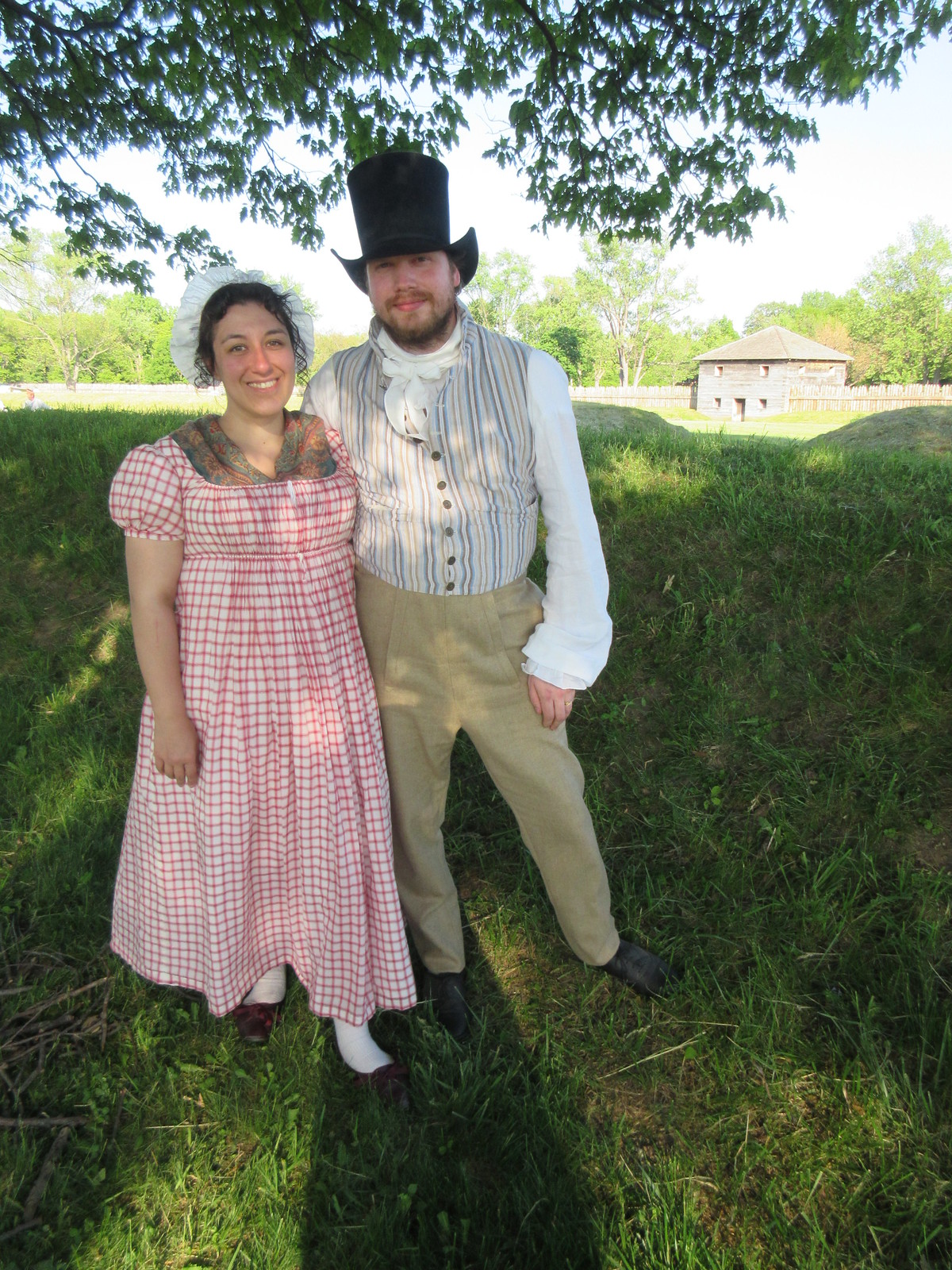 Some of you may recognize that dress...although I've never worn it before!  I made it back in 2011 for my friend Erinn to wear at a couple of events.  It was then loaned to another friend so that she could use it, and came back to me when I realized that I'd shrunk out of my entire wardrobe and had nary a thing to wear.  I was very surprised that it fit me, but quite pleased!

Rich is wearing his wool flannel trousers with a shirt that I commissioned from my friend Sarah, and a waistcoat from Julie at The Fat Reenactress.  His hat is by Matthew Brenckle.  I have very wonderful friends and acquaintances! 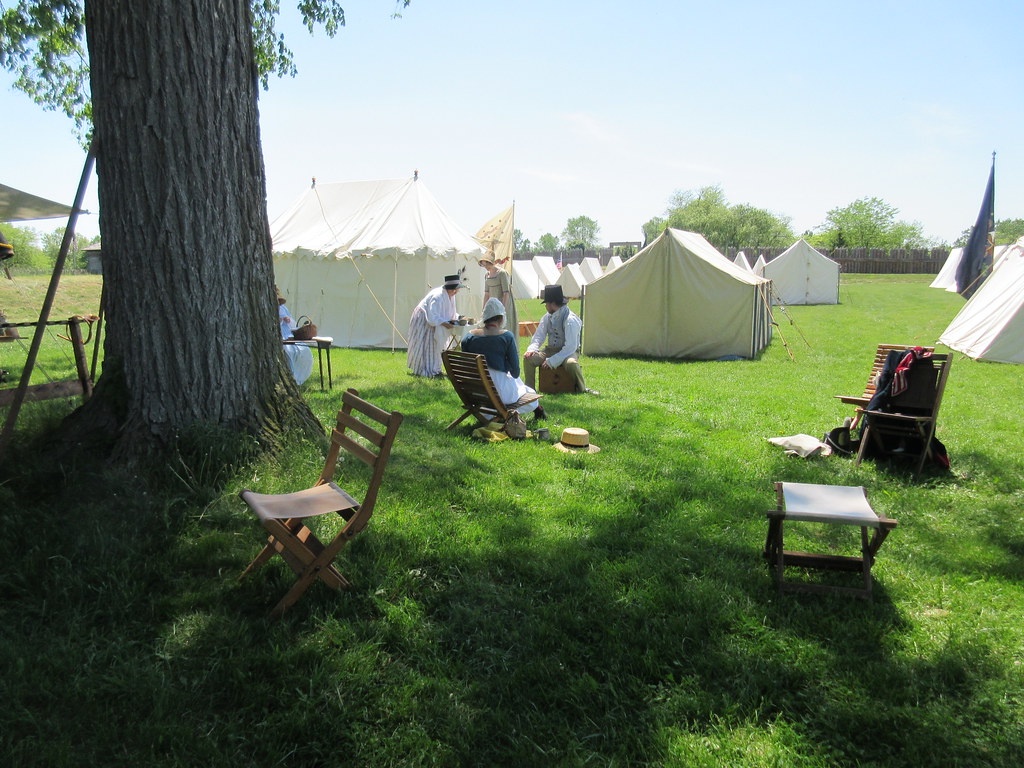 During the afternoon, we kept hearing a strange noise.  I theorized that it was a goat, while my mom thought it sounded like a child's toy.  Rich, not so keen on sitting in one place and chit-chatting, was busy amusing himself on the grounds of the fort.  Suddenly, he appeared at my elbow and said, "You know that bleating noise?  It's a fawn!"  And sure enough--this little one was hiding out in some underbrush near one of the gates! 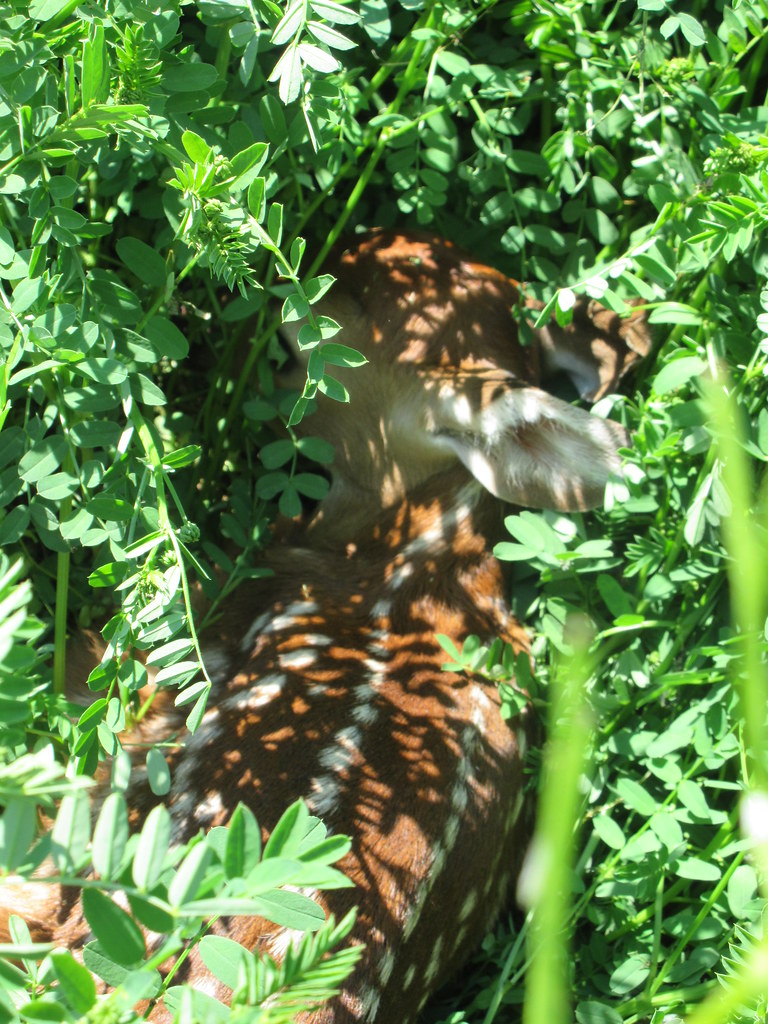 According to the site staff, it's not uncommon for deer to hang around inside the fort.  Mothers will also often hide their young in a safe place and go elsewhere to graze, so as not to call attention to the fawn with her presence.  This little dude wasn't too happy with the sudden influx of reenactors, tents, and boom-sticks for the weekend, but chances are that his mummy came back for him once things quieted down in the evening.  Being able to see such a teeny-tiny little fawn so close was a real highlight for me, though, and it was nice to know the staff were keeping watch over him.  He really was tiny, too--probably about the size of my 18lb dog in the body, but of course with long, spindly legs.  So darling! 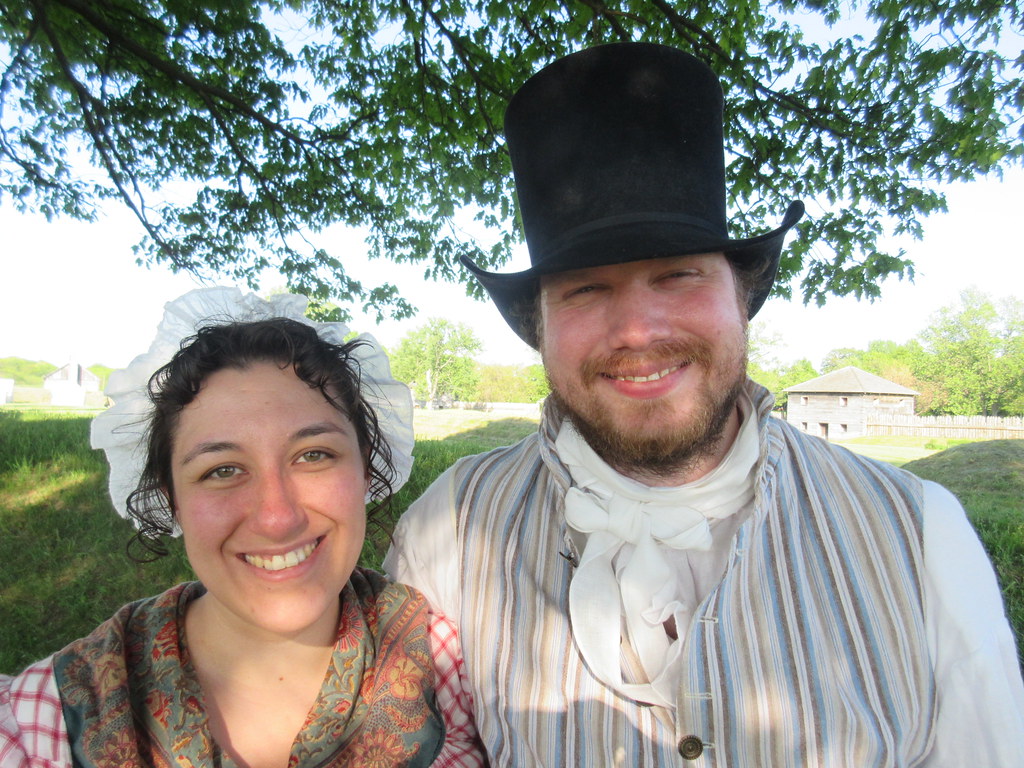 Aww, aren't we lovely?  (It's been almost a year and I still find the name puns amusing...)  Oh!  By the bye, I used pomade for the first time at this event and LOVE it.  I washed my hair the night we left (Friday) and pomaded it while damp.  I ran out of energy to roll it (we didn't have camp set up til almost midnight) and instead used a curling iron on it the next morning.  With a spritz of hairspray just for my own reassurance, the curls lasted all day and actually survived being braided and slept on--I had to wet them down the next morning to incorporate them into a smoother 1860s hairstyle!

The pomade was a last minute thought and I just grabbed a random tin from my local Sally Beauty Supply, but I HIGHLY recommend it for period hairstyles!  I might be the last one on this natural hair care bandwagon, but in case you are interested in trying it, you can get period recipes at Heirloom Hair Care or LBCC Historical, both on Etsy.

Anyway!  Sunday and Monday were spent at Greenfield Village, this time in the 1860s.  I again had not one thing to wear that actually fit me, so the weeks leading up to the event involved lots of sewing.  My wonderful mother helped me out with a new chemise and drawers, and I re-sized a skirt from an older dress that was now too large.  With the addition of a new corset cover, sheer organdy waist, and a black silk Swiss waist, the skirt took on a new life as a fashionable outfit that was also comfortable and cool in the heat. 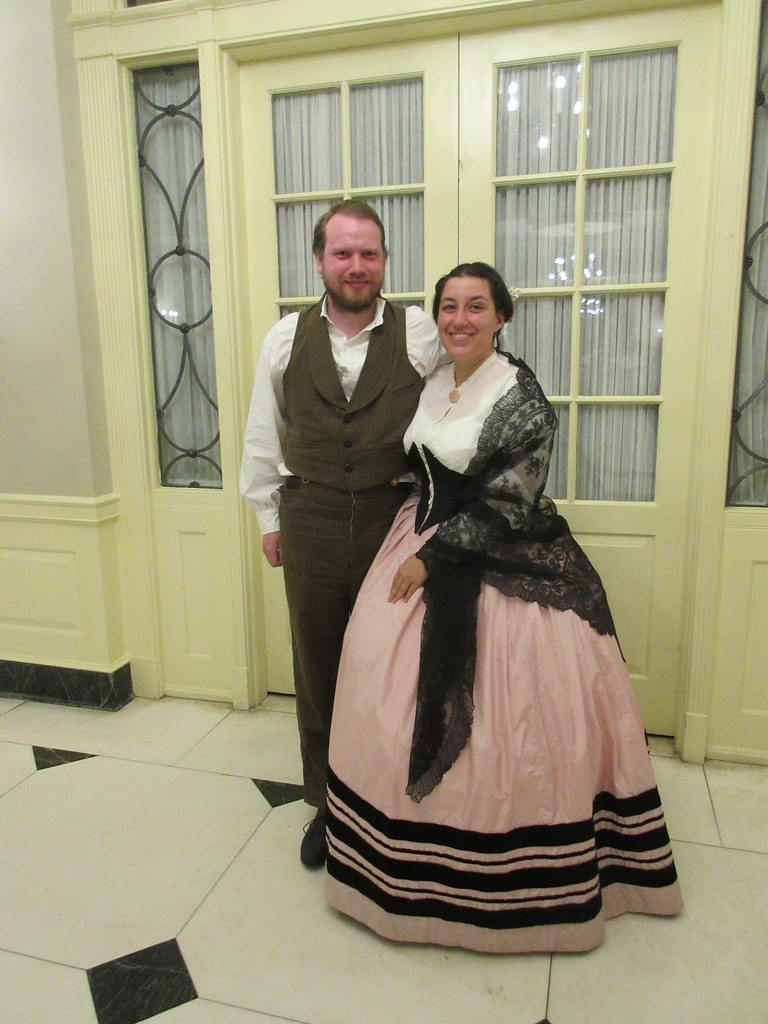 Overall I'm quite pleased with the outfit and it also functions as my Historical Sew Monthly submission for this month--the challenge itself is "practicality," and while this particular outfit is more couture than commonplace, the fact that it re-uses an older skirt and that it saved me a lot of headache and panic on a deadline seems very practical, indeed.

I don't have as many pictures of this event, because while both sites have a high emphasis on historical accuracy and maintaining a period setting (i.e. no visible modern gadgets like phones or cameras), Fort Meigs was not very crowded.  At Greenfield Village, there were constantly visitors around and we had to quickly snatch snapshots in the brief lulls, or wait until after hours to photograph anything.  I do have more pictures of my outfit, but I'm saving those for a post about the HSM and the outfit itself!  So for that reason, I leave you with a photo of my husband and some sheep.