I did actually finish my regency stays!  They're super-basic, just some light boning with no cording or anything, but they will work for now.  No photos yet, because I couldn't find a chemise that didn't need mending and nobody wants to see corset photos with no chemise.

What I do have photos of, though, is the stuff that I've made for Rich.  We have a regency ball tomorrow night and his trousers needed buttons, buttonholes, and braces in order to be wearable.  As of last night, he now has all three!  All that's left is to hem them. 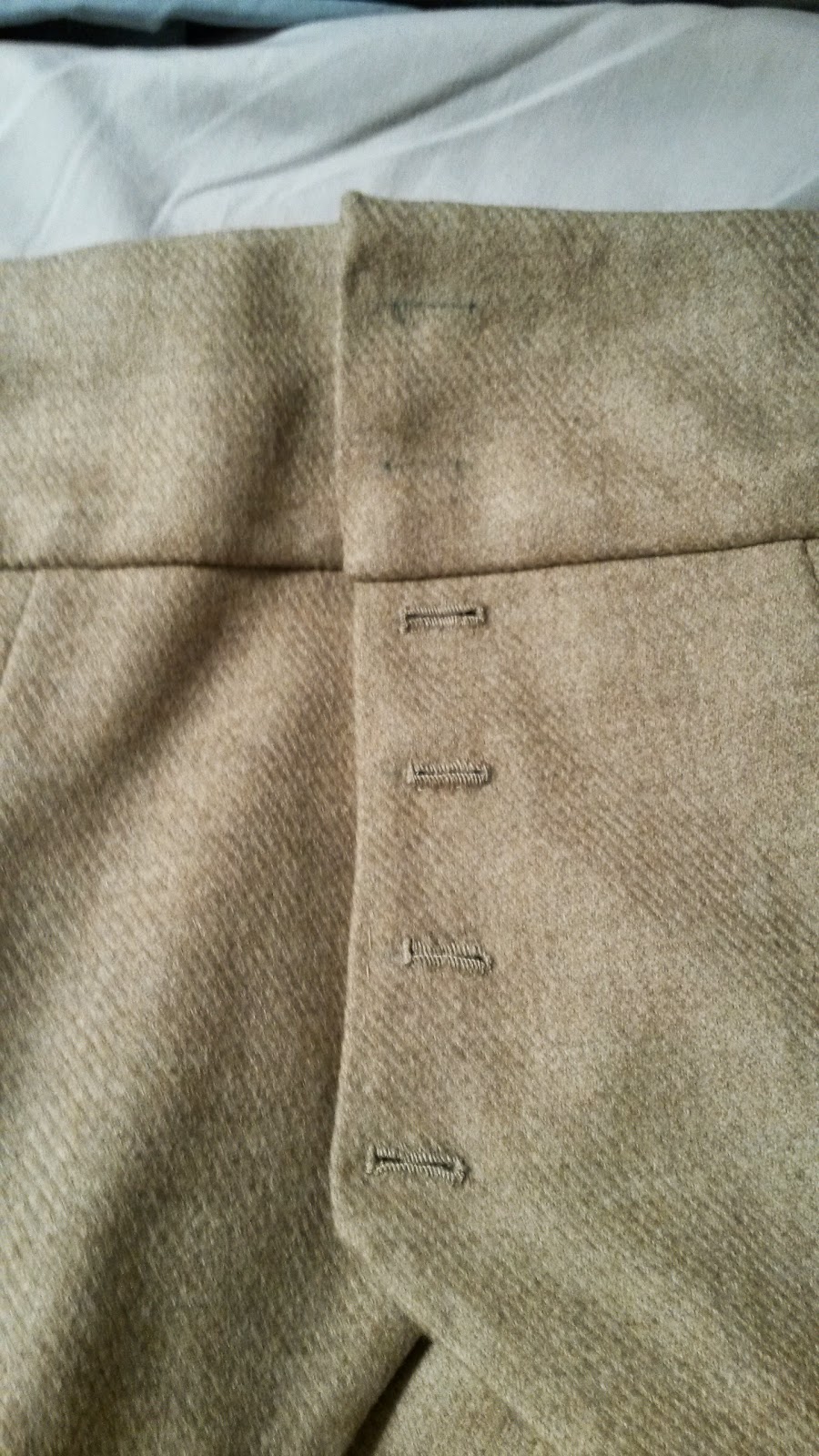 Above, buttonholes in progress.  I started with the ones in the fly that you wouldn't see!  I've always been chicken to do hand-stitched buttonholes before, being absolutely certain that they'd look like crap and pull right out of the fabric, but these seem pretty sturdy (and don't look too terrible for a first try!)  I used the information from this post on 18th century buttonholes, and found both the linked Burnley & Trowbridge Facebook album and the Youtube video by Stuart Lilie to be very helpful!  And you know, they even go pretty quickly once you get into a groove!

The buttons Rich picked are 5/8" horn ones from Burnley & Trowbridge.  The internet told me that buttonholes should be the width of the button, plus 1/8" for ease of use (more, if you've got super thick buttons).  I started out by marking my fabric and using teeny scissors to snip the holes, but I had a hard time getting a consistent size.  So I switched to a chisel, which is what Hallie Larkin recommends in her post and was very accessible to me...there's a Lowes right down the street from my job.  They work great, by the way, and the three-pack I got included 1/2", 3/4", and 1" for about $12.  Definitely the way to go, in my opinion! 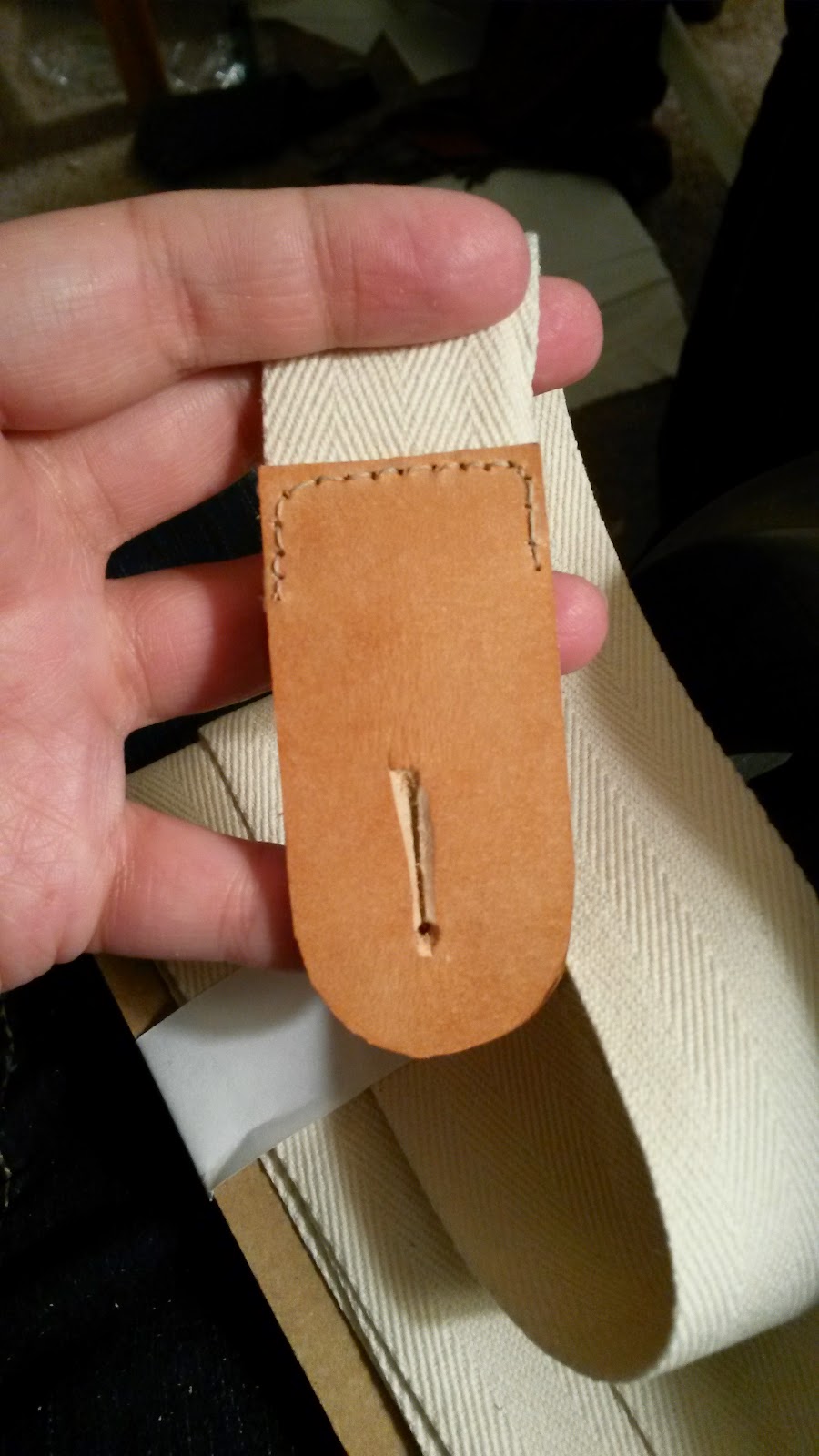 Because the trousers sit at or above Rich's natural waist, they just fall down if there isn't something there to keep them halfway up his torso.  I mean, he has a bit of a tum, and narrow hips, so even his everyday jeans and trousers need a belt, but that's not really an option here.  So, he needed a pair of braces!

A while back, Kannik's Korner was offering kits for braces, but when I contacted them they didn't have any in stock and I had a deadline...so I had to wing it.  If you're looking to make some, though, I would absolutely contact Fritz and Kathleen!  I like what I was able to come up with, but I'm not sure it's the "right" way to go about it, you know? 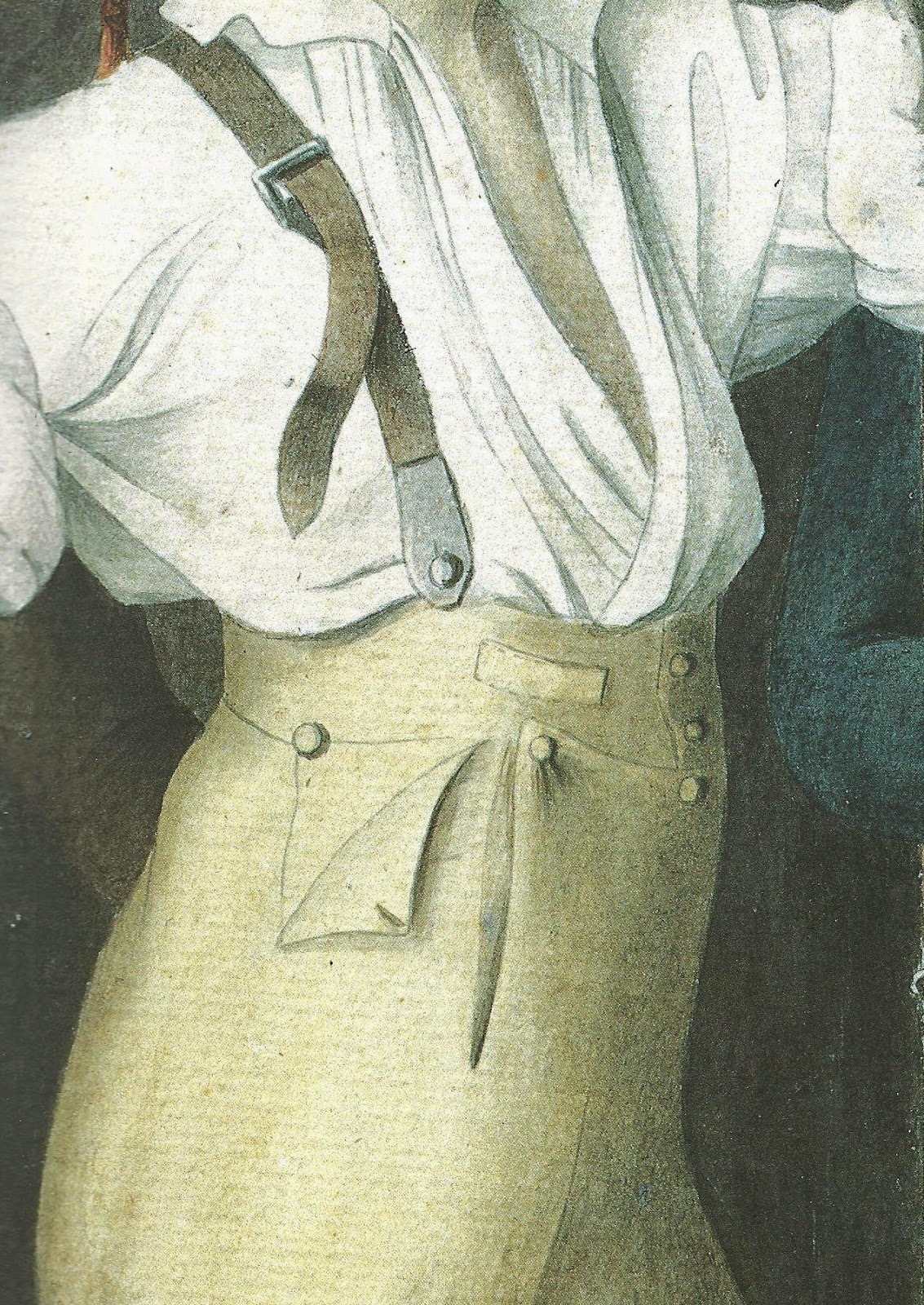 This image, found on Pinterest (without a link back to an original source and said to be a detail of "The Filial and Heroic Devotion of Mademoiselle de Sombreuil in September 1792") iswhat I based my construction on.  I used leather I already owned for the tabs and purchased buckles and webbing from Needle & Thread in Gettysburg...over the phone, since they don't do online ordering.  But they were very helpful and I highly recommend them!

I didn't take any pictures of the tab-making process, which was quite hard on my hands and very nerve-wracking.  The leather was pretty thick to begin with and I had to not only shape it, but also shave (skive?) it down to a more manageable thickness.  This involved very sharp blades and honestly probably needed more hand strength than I currently possess, so it took a while.  And I didn't take pictures because I was too busy worrying about injury avoidance.  I managed to stab myself once, but it was while I was energetically sweeping leather shavings off the couch while holding an unsheathed knife, like a dingbat.  So, you know, it went pretty well.

Fortunately, I had a little baggie of glover's needles lying around from previous projects, which worked great for attaching tabs to straps.  I also have this funky leather thimble thing that came with a quilt-of-the-year block kit that I got ages and ages ago...it has been absolutely invaluable in the past several weeks, both for this and for doing eyelets in my blue wool stays.  I can't seem to work with metal thimbles, but this one works great. 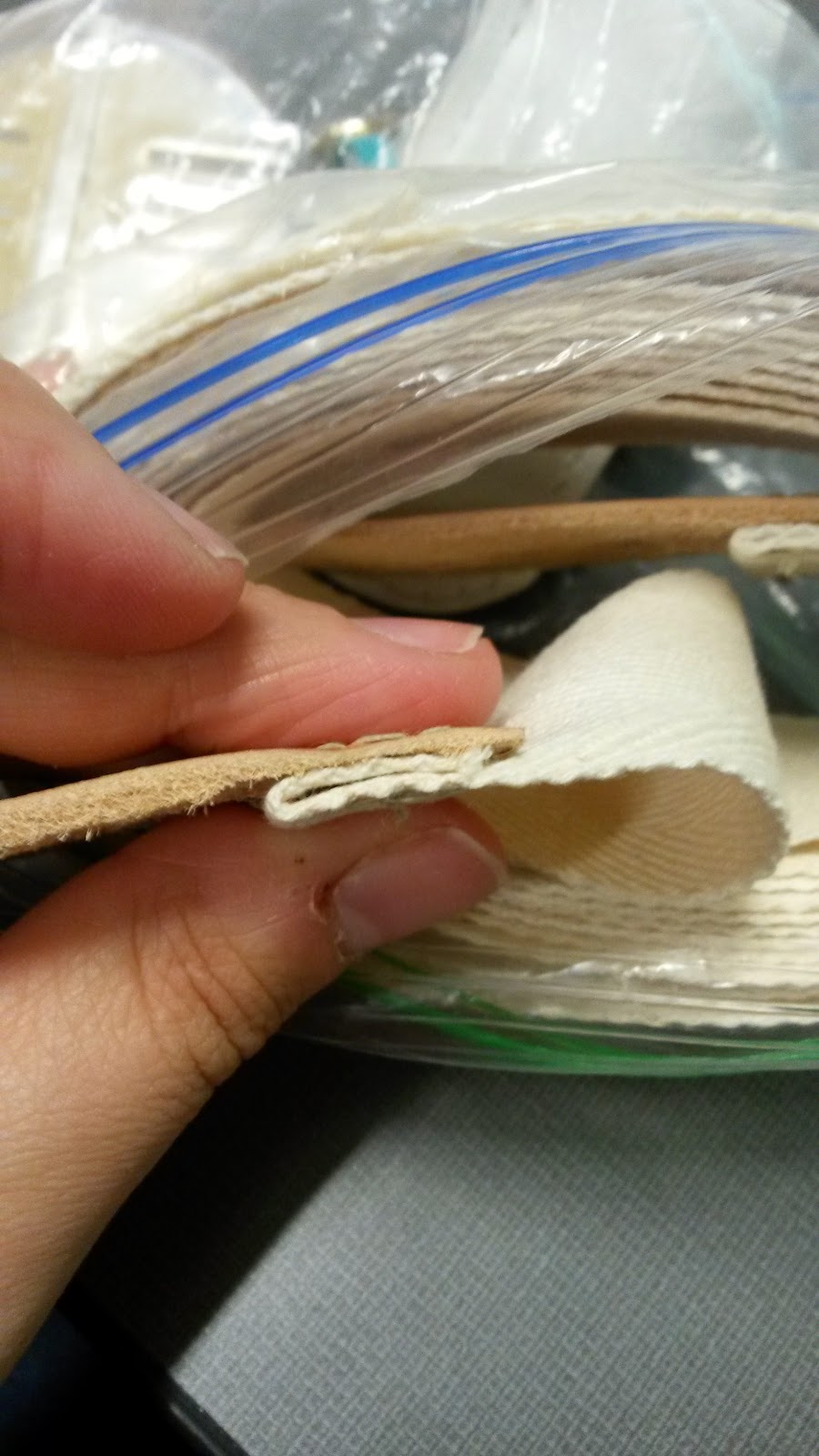 Above, you can see how I shaved the leather down pretty thin where I wanted to stitch.  The thicker part is thinner than it was before I attacked it with a box cutter,but still too thick to get a needle through. 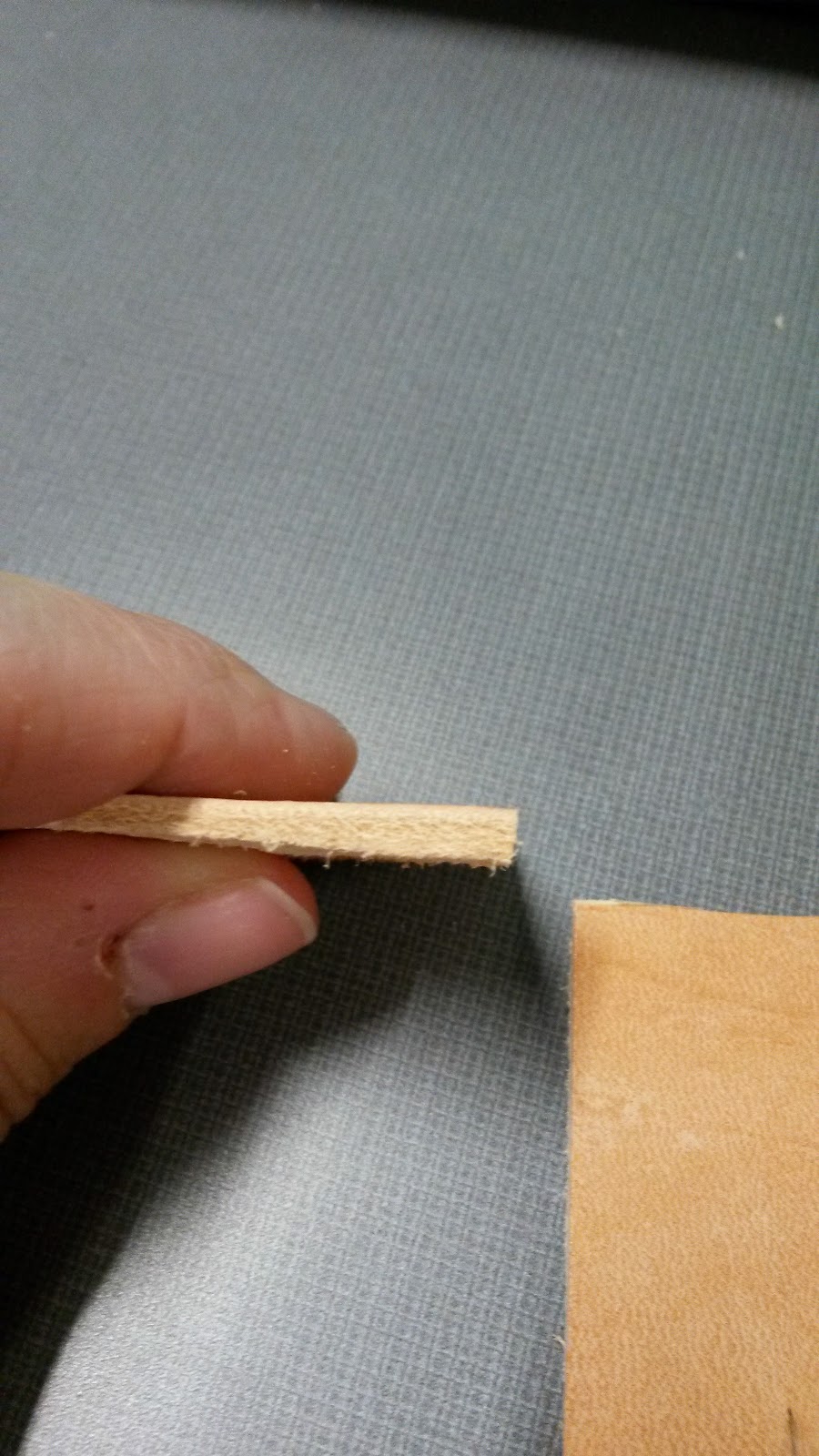 For comparison--here are the pieces after skiving for the basic tab shape, but not yet thin enough to stitch.  In a couple places I left too much leather and it was quite hard on my hands, even with the thimble. 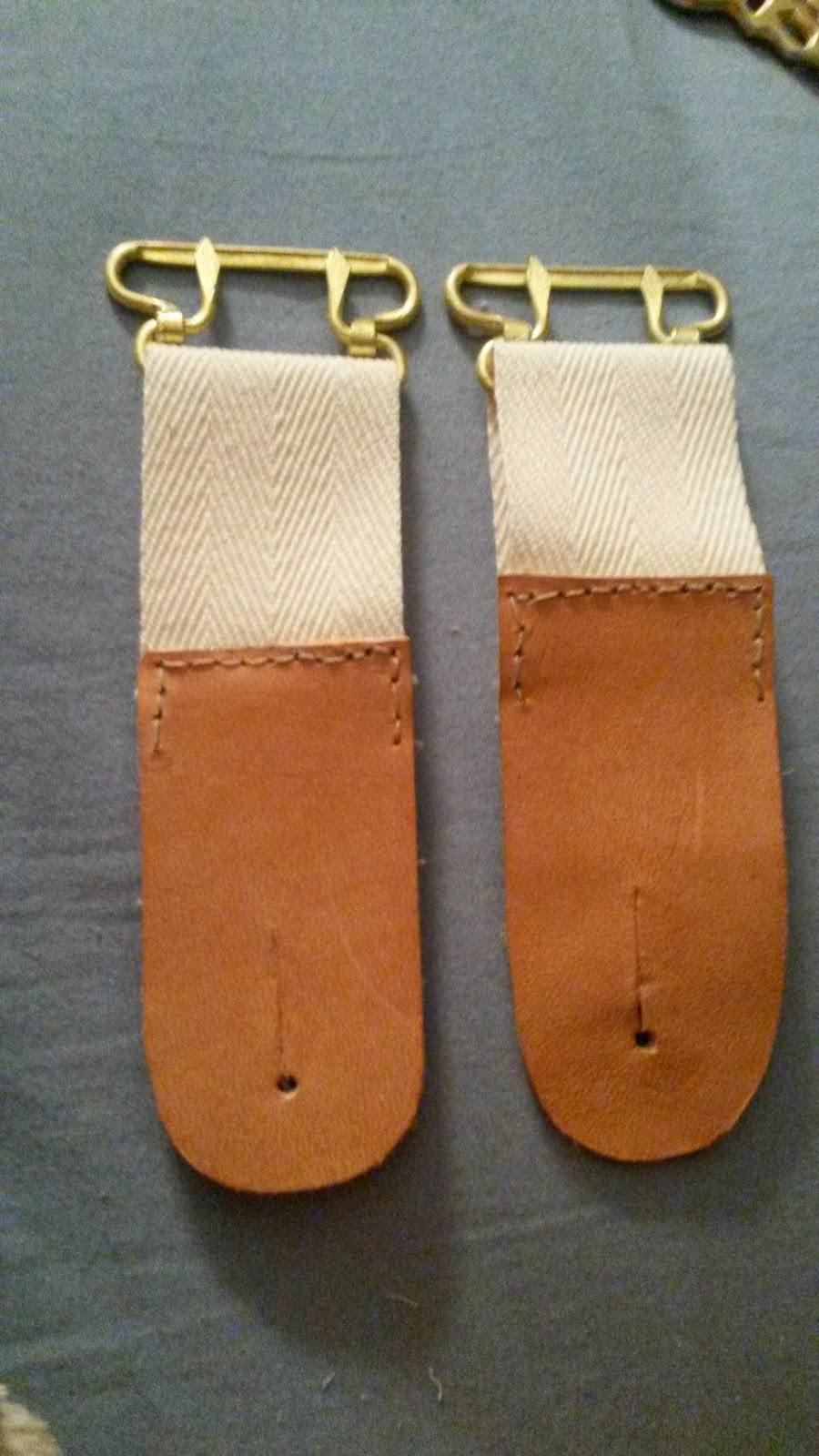 The braces are actually four separate pieces when disassembled--two in the back, two in the front.  These are the front tabs, wit buckles attached.  I'm debating whether to sew another line across the tabs, so that the stitching is a box rather than an upside-down U...but the thing about leather is that it doesn't naturally have holes in it like a woven fabric, so each stitch is basically perforating the material rather than passing between threads or fibers.  I know it probably wouldn't make a ton of difference, but it seems fine to leave it with minimal stitching for now.  And, you know, my hands hurt. 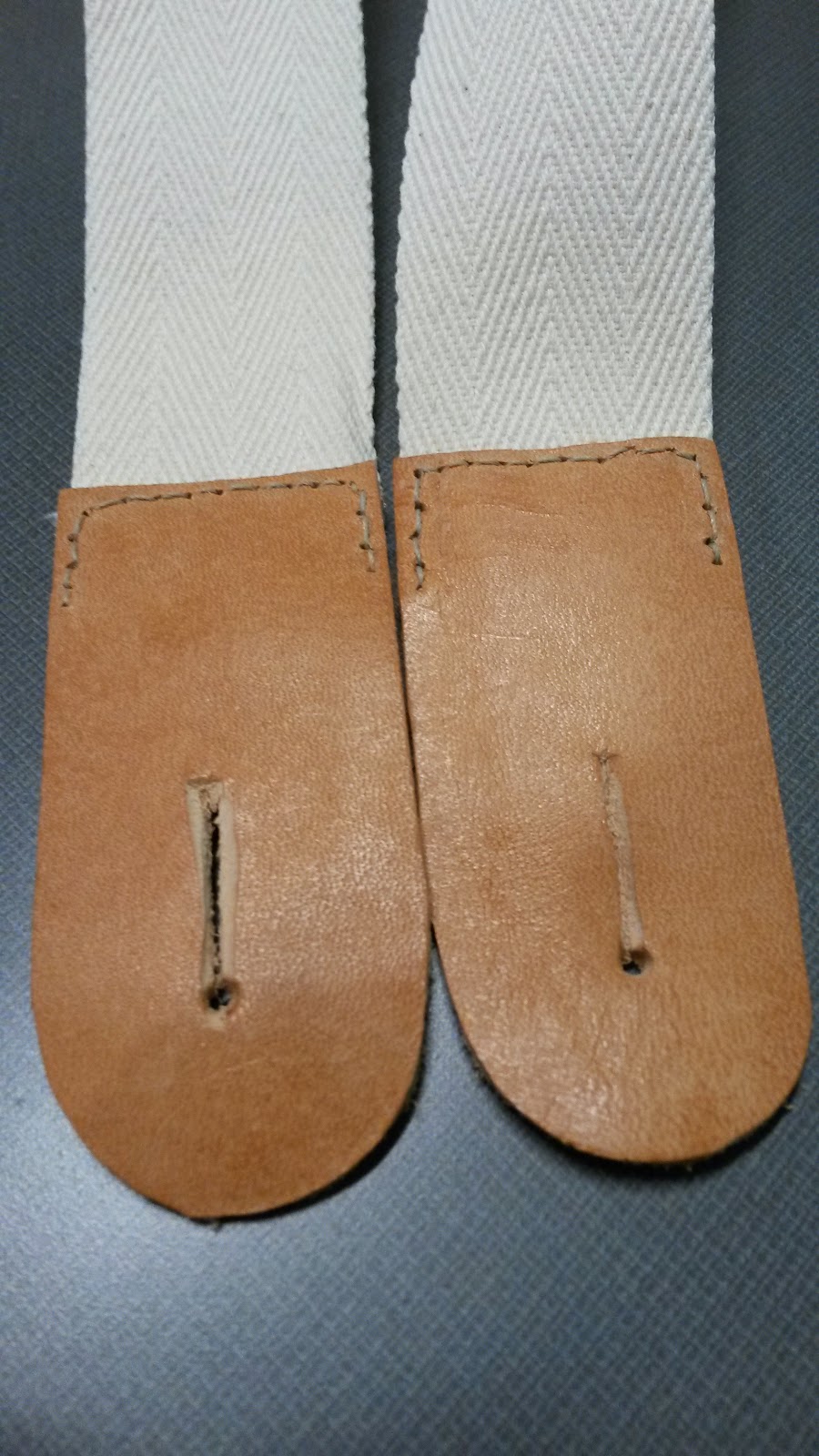 These tabs will button onto the back of his trousers, while the straps at the other ends are just hemmed and will pass through the buckles.  Even with skiving off a bunch of the overall thickness, I found that I needed to bevel off the edges of the buttonholes or we couldn't get the buttons through.  If anything breaks on these, it will NOT be the tabs!

So, there you go...the basics of Rich's trouser-holder-uppers.  Are they done right?  I have no idea.  Are they sturdy, decently made, and will they keep his pants up?  Absolutely.
Posted by Katie Lovely at 11:51 AM