Hey guys.  It's winter.  Know how I can tell?  My nose is always cold and people laugh at me for wearing hats and mittens at work.  Scarves are at least socially acceptable fashion accessories this season.

My sewing plans already included a new pair of 18th century stays before I decided to bandwagon this shit up, and much to my...delight?  relief?  the February "Blue" challenge aligned perfectly with my plans to use these stays at the Met for my inspiration: 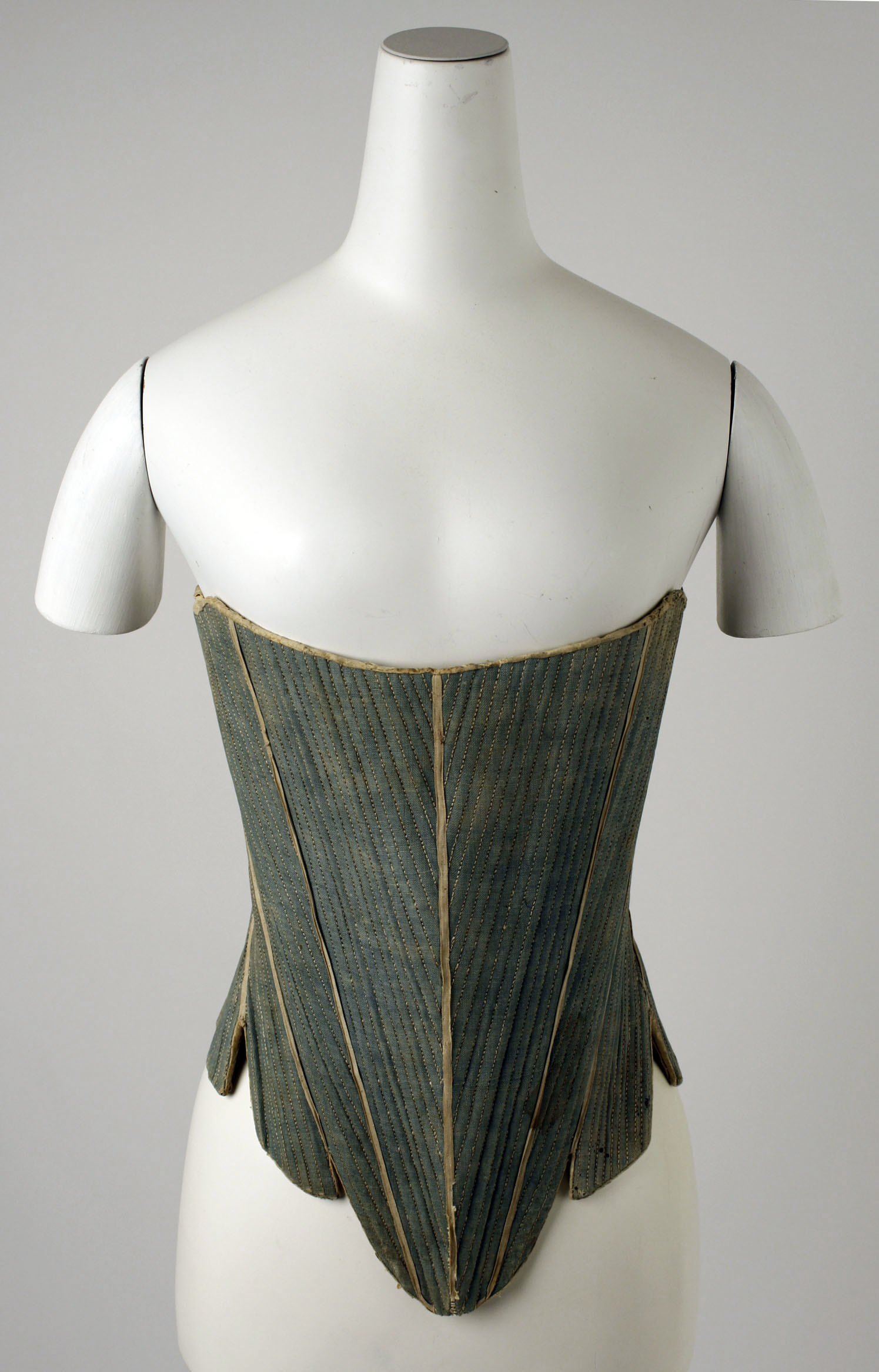 These are similar in cut and shape to the pair that Linda Baumgarten diagrams in her book Costume Close-Up; that pair is made of a wool satin with two inner strength layers and an attached linen lining.  The Met pair is linen, and both are bound in soft leather with tapes sewn over the seams.

I've got a remnant of soft slate-blue wool from Wm. Booth, Draper waiting to become stays, along with a cut of their blue and white checked linen for lining.  The inestimable Twila Taylor used her costuming ninja skills to size the Baumgarten diagram up for me, and I made a photocopy so I could hack away at it without damaging her original tracing.

According to the book, the bust should be around 33-34", with a 28-29" waist.  My measurements are holding (frustratingly) steady at 44" bust, 36.5" waist.  So my brain went like, "oh hey, if you add about 5" to the pattern you should have a decently-sized gap in the back and it should fit great!  So I blithely set about slashing and spreading my pattern pieces.  And I checked my measurements.  More than once.  I cut a mockup, sewed it up, and tried it on.

...And it was too big.  As in, it laced completely shut, no lacing gap, minimal compression.

Yeah, that's basically a transcript of what happened when I tried the stupid thing on.

So that was on January 22, while I was still working on my 1860s corset.  Because I wasn't really excited to work on that corset, I wanted my awesome blue stays!  But then that little shit decided it didn't want to play nice, so I threw it in the corner to think about what it had done and finished the corset.  But now it's February and I need stays, and I had enough time to cool off so that my pattern and I could have a meaningful conversation about its hurtful actions and start from scratch.

Which is what I did yesterday on my lunch break.  Normally I go home for lunch since I live quite close to the office, but yesterday it was snowing like nobody's business and Rich had the car, so I made use of our lovely big filing stations to re-trace my pattern in its original size.  I'm going to try it un-altered and go from there.  The length and waist level and everything actually looked pretty good on my first mockup, but the additional width was apparently too much.

In other news, I want that filing unit in my house for use as a cutting table.  How much would my back NOT hurt if I had that?!

My next step will be to sew up my mockup #2, hopefully with much more success and much less swearing.  That didn't happen last night because it's winter, so I went home and took a nap with the electric blanket instead of sewing.  So, you know, maybe tonight.

My nose is still cold.