A Pedantic Treatise on Thread

Nothing too exciting today, but I did some test stitching to see what I like best for my blue stays. 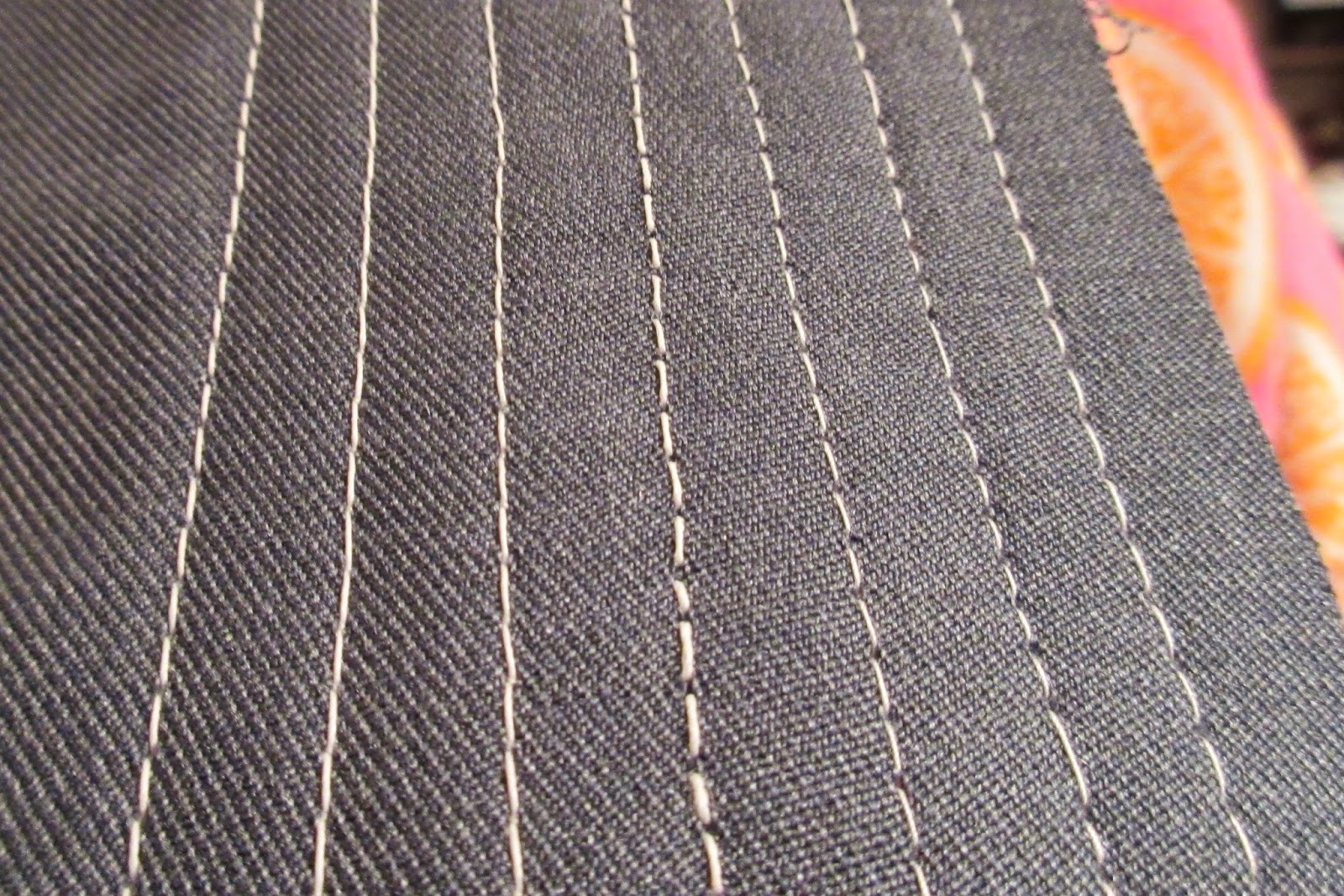 Here's my test swatch, which is two layers of cotton twill with a layer of the blue wool on top.  I actually started with the right side, with just plain old 100% cotton Gutermann thread on the machine, longest stitch length, same thread in the bobbin with the blue side up.  The next test was the same setup with a shorter stitch length.  As you can see, my machine threw a hissy fit and decided to skip stitches on this one.  I retaliated by changing the needle.  The next test was with the same thread setup, new needle, and a shorter stitch length with the swatch flipped so the blue side was on the bottom and I was looking at the inner twill layer while stitching.

That seemed to be fine, but I then decided that the thread looks a bit thin.  The inspiration stays seem to use a fairly stout thread, so I changed to Americana glaced quilting thread.  The JoAnn near me carries this stuff in their endcap bins, and I tried it on the recommendation of my friend Mike "Captain Tightpants" McCarty.  In fact, I used it on my last pair of 1812 stays and really liked the look.  And yes, "glaced" is spelled that way on the spool.  Even though my word processor is telling me it's not actually a word.

Anyway, I was then seized by a temporary insanity and decided to try hand stitching a row.  That's the next test line.  And then I realized that even if I could sew a straight line and my hand stitching didn't look like it was done by a drunken buffalo with a blindfold on, there's no way in hell I want to or even can hand stitch sixty billion boning channels between now and the end of February.  So no, I will not be hand-stitching the boning channels on this MF-er.

Next was a row of stitching with the Americana on the top and a normal cotton bobbin...that sucked and skipped stitches so badly I pulled it right the hell out and you can't even see it in pictures.

After that I put a bobbin of the Americana in and flipped the swatch over so the twill was up and the blue wool was down.  The next two rows you see after the drunken buffalo hand-stitching (second and third from the left, in case you've lost your place) are that arrangement with gradually increasing top tension, since the bobbin is now functioning as the visible thread in the test.

The far left line is what I think I'm going to go with, which is Americana on the bottom, Gutermann cotton on the top, and my top tension set at between 6-7.  And nobody probably cares, but later on when I want to do this again and am going "shit, what did I actually settle on," I will hopefully remember that I took the time to type this all out and go back and look it up.

One benefit of having the bobbin thread end up on the outside of the finished garment is that I will be able to mark my boning channels on the inside layer of twill and NOT have to worry about removing them!  I can use a fine tip Sharpie or super sharp pencil and it won't show through, and I don't have to worry about if it washes out.  There will be a removable lining of checked linen sewn into the finished stays, but even if there weren't...who will be looking at the inside of my stays?  Nobody who cares about Sharpie or pencil lines, that's who. 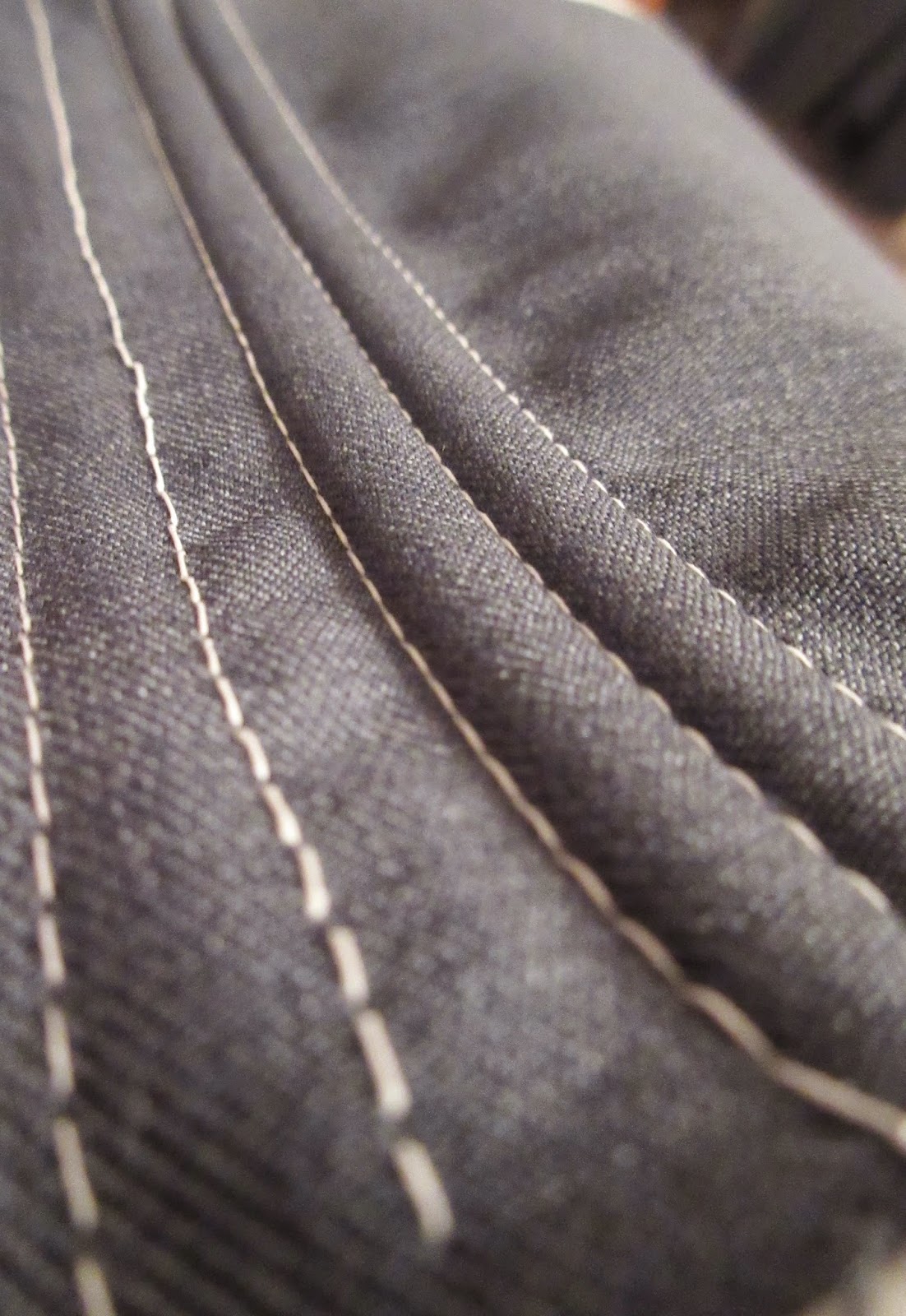 I also tested out some boning arrangements--I received a roll of flat oval reed from a generous friend and experimented a bit with how many to use in each channel, how flexible it was, etc.  I'm still undecided on that, but here's an artsy-fartsy macro picture.  It's coming together!
Posted by Katie Lovely at 4:13 PM