I've never done one of these before, but since I haven't taken pictures for my intended post yet, I figure this will make a nice interlude.  Also, you don't know it yet, but there's a pun in the title--and you all know how I feel about title-y puns! 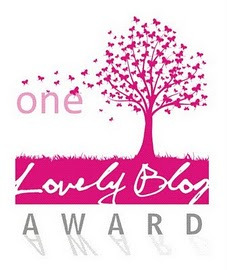 My dear Samantha at The Couture Courtesan awarded me this because she is a sweetie and a love.  Oh, and she makes beautiful stuff!  If you don't already follow her blog, you really should.

1. Thank the person who nominated you.
2. Add the ‘One Lovely Blog Award’ image to your post.
3. Share seven things about you.
4. Pass the award on to seven nominees.
5. Include this set of rules.
6. Inform your nominees by posting a comment on their blogs.

Let's see...I'm not sure there are seven things about me that aren't hideously boring, but I'll give it a shot!
And, my nominations!

....Right, now I remember why I never do these things.  Because how can I possibly pick!?!?

Teacher, Baker, Gourmet Meal Maker
Remember how I mentioned some of my superlongtime friends are from the internets?  Jen's one of them, and I love her cooking blog.  She may or may not know it, but her blogging has inspired me to be more adventurous in the kitchen, and also, who doesn't love pretty pictures of yummy food?

Scene in the Past
Ginger is another internet friend, although we have actually met in real life--twice!  She was more than a little instrumental in getting me into 1860s clothing, and I've had tons of fun watching her ace outfit after outfit in new periods.

Old Soul Threads
I basically consider Jesse part of the family, and am in awe of her crafting abilities.  Sure, I make historical clothing...but I can't craft to save my life!  She does adorable cake pops, super cute bags, and the crochet aviator hat she made for her son last Halloween is basically the best thing I've ever seen.

Before the Automobile
I just can't even describe this stuff.  This gal is self-taught...and if I had half her skill I would absolutely die.  And also her figure.  And her hair.  If I didn't like her so much I'd hate her, but her stuff is so pretty and she's so nice and so gracious!

One More Stitch
Basically, I am in awe of anyone who can knit.  I taught myself how to once and then decided I hated it...I was so slow!  This blog not only has awesome knitting, it's historical knitting.  Seriously.  Amazing.

A Day in 1862
Great 1860s stuff, kid patterns, and cute pictures.  What's not to love?  I was fortunate enough to meet Amy once in real life at an 1860s event in Texas, and we had great fun socializing...and playing with her adorable daughter.

Rococo Atelier
Okay, there's a lot of beautiful stuff here but seriously?  I've never seen one person make SO MANY beautiful pairs of stays.  How.  I don't...what.  How do you even?  Seriously beautiful.  And she's cute as a button in her pictures!

P.S. This seriously took me all day because I thought of five random facts about myself and then got stuck on a sixth for about five hours.  Eesh!