When We Last Left Our Heroes...


Okay, so "a while" might be something of an understatement. It's been *cough cough* since my last post, but I swear I haven't been doing nothing. Things have actually been pretty busy, hence the lack of blogging! I'm hoping to change that and get caught up on some of my projects in 2013, so I figured I'd start with a little bit of a "this is where I went" update. Samantha and I did ourselves up and put on a presentation about doing laundry in the past. It was a great day, everyone was really interested, and the kids loved it. 
So, who remembers me posting about needing to go to England? Well, I think I can finally officially reveal why I had to go. 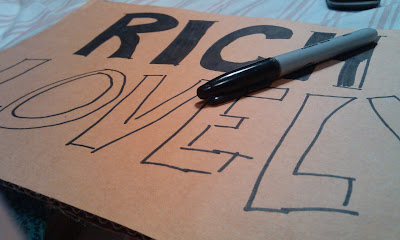 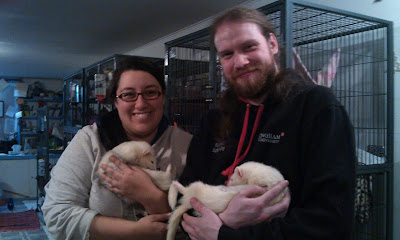 I met a boy! The hairy one. No, not one of the ferrets.

So, this is Rich. We've been talking since July of last year, but we weren't sure where everything was headed. The money I raised via Etsy went towards buying a plane ticket to go visit him over New Year, but it turned out that he was able to come over for Thanksgiving. It was the first time we'd met, though we'd spent hours on Skype and IM together. Fortunately we get along even better in real life than we do on the internet, and things went really well while he was here. Even though my family is crazy and things were really insane. Why insane? Well, you see... My sister got married! While Rich was here. Five hours away from where the rest of our family currently lives. Let's just say it was a little crazy. My poor introvert boyfriend had some nervous moments, but he met my whole family and survived...mad props. Plus he cleans up really nicely! It was a beautiful wedding in the end, but man...I'm all wedding-ed out for a while! At least in terms of planning and executing. Weddings in general are great fun! After the wedding we celebrated Rich's birthday before he flew back home, and of course there was the mad rush to Christmas, which actually turned out to be nice and low-key this year. A much needed rest after having so much happening at the beginning of the month! 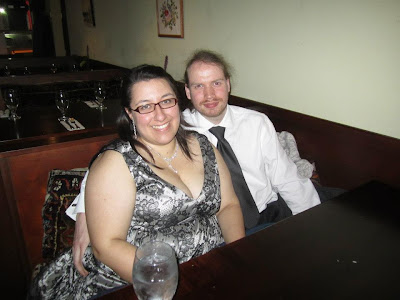 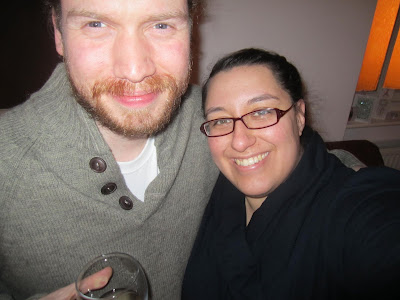 Celebrating New Year together
After Christmas, I flew over to meet Rich's family and spend the New Year holiday with him. We had a great time, although we were so busy running all over his hometown that I barely got any pictures of us together. However, the last half of my week-long vacation was spent in Bath, where I took TONS of pictures! So, I'm standing in Roman ruins...aka this rock I'm touching is older than my entire COUNTRY. How cool is that?!
January 19, 2013:

And, last but not least, my dear friends Mike & Alex got married this past weekend. I talked Samantha into coming as my +1, since Rich is stuck in "Jolly Old" with a job and such, and apparently can't just fly over on a whim to go to a fantasy-themed wedding with me. Hmph!

Actually the conversation that led up to me asking Samantha to go with me was quite amusing...I jested with Rich that since he wasn't here, I could ask anyone I wanted. He made quite the grumpy face about that until I broke down and said, "Rich, by 'anyone I want' I really mean Sami." He laughed and said that was okay. So then I went to Samantha and asked, "Hey Sami...want to go to a wedding with me?" She seemed favorably inclined, but not terribly excited. Until I said, "It's at a castle, and we get to dress up." I think the response was something along the lines of "UM HECK YEAH!"

Samantha posted more about the outfit she wore here, and I pulled my well-loved and much-worn Arwen dress out of the back of my costume closet for the occasion. 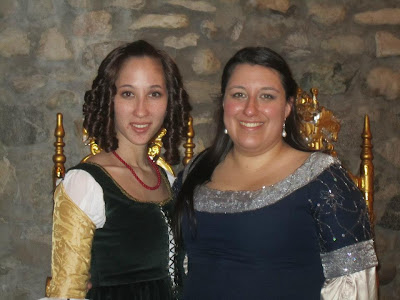 In front of some awesome thrones 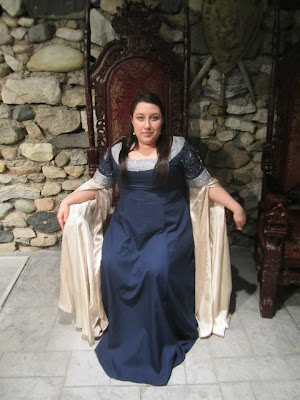 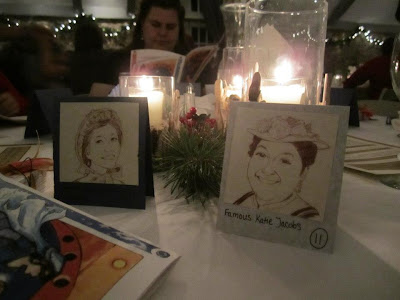 AMAZING place cards!
And with that, I think we're up to date! I've been working on finally working out the sleeves on the dress that I abandoned last June, so we'll see how much progress I make on the whole sewing thing in the next couple weeks. The next event will be February 2 at Fort Meigs in Ohio, so I've got a good deadline to work toward. And we all know I work better with a deadline...

Hopefully I'll see you all sooner rather than later! :P