Over the past week, I've been kind of kicking myself that I didn't take any construction photos of making Matt's clothes. We were in a big time crunch, but there were still some really neat techniques we used, specifically in the building of the waistcoat. I was super happy with how that turned out, so I decided to use a few of those methods while assembling my latest project.

I'm working on an 1812 dress with a back closure and since I liked the interfacing and stay tape method we used for Matt's vest closure so much, I decided to use it on my center back opening. The dress is a gorgeous worsted wool from Wm. Booth, Draper, and I used 3.5 oz handkerchief linen and cotton twill tape for the reinforcement layers. 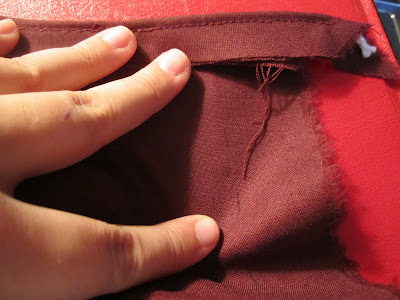 First, I prepared the neck edge.  I'm using piping on mine, but normally I'd just press the edge over and possibly baste it.  Then I marked the center back where I wanted the finished edge to be.  Since it's inside and the fabric isn't sheer at all, I just used a ballpoint pen. 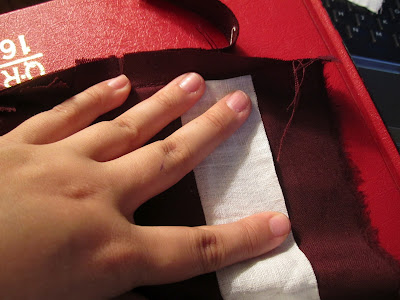 I cut the strip of linen on-grain, about an inch and a half wide--enough to allow space for button holes if I decide to do them.  The linen should butt right up to the center back edge, but not go into the seam allowances.  I wound up cutting it long and then trimming it later. 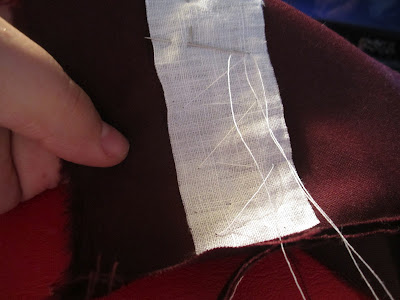 Baste it in.  It doesn't have to be pretty.  It just has to keep the linen from sliding around while you do your thing.  As you can see, my basting is pretty huge, but that means it'll be easier to take out later.  Also, you'll save yourself a lot of headache if you don't knot your thread.  Just stitch a few times in the same place to secure the end. 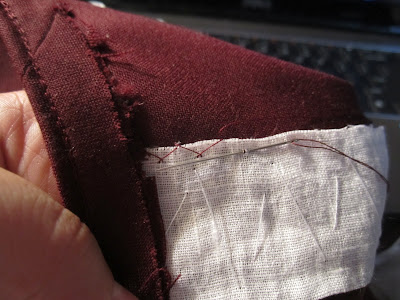 Use a little tiny catch stitch or whip stitch to secure the edge of the linen that does not touch the center back edge.  When you stitch through your fashion fabric, only catch one or two threads.  You don't want this to show on the outside, so use a matching color and be careful where you stitch.  A little concentration now will pay off. 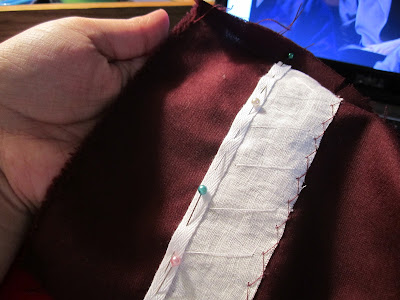 Next, the stay tape.  This is what gives you a nice, solid edge, so make it a nice, straight one!  This goes on top of the linen, flush with the center back edge. 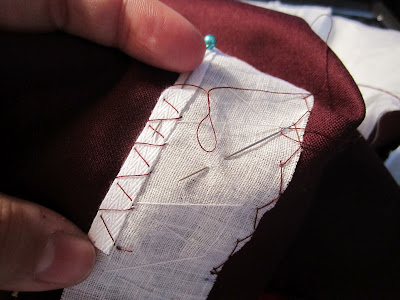 More catch stitching...I used a z configuration instead of an x to save thread and time, but the same idea applies.  If you stitch all the way through, make sure you only catch a thread or two of your fashion fabric. 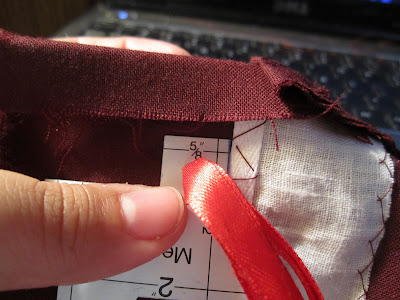 I had a lot of extra fabric in my center back, so I trimmed it off to reduce bulk.  I like a 5/8" seam allowance because of reasons, but you could do as little as a quarter of an inch.  Just remember, when you fold it over it has a little extra thickness to cover, what with the interfacing and stay tape, so account for that wee bit of extra bulk-especially if your fabric is prone to fraying.  You don't want to lose that nice clean edge because your fabric decided to shred right out from under you. 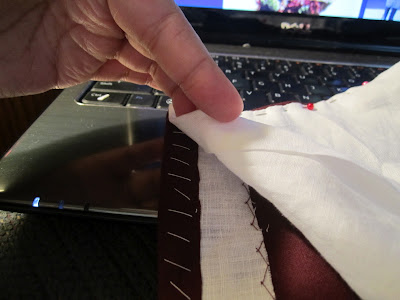 I basted my seam allowance in place just for ease of handling, but you could just as well pin it.  Fold your lining edge over, and attach!  I like a fell stich for that, but a whip stitch or whatever you fancy would work just as well.

And that's it!  A beautiful, stable edge that won't bag, stretch, flop, or rip.  Can't go wrong with that!
Posted by Katie Lovely at 8:00 AM